#PETALUMA PROUD of the 2019 Police Officer of the Year

Corporal Nicholas Raccanello, who has been selected to receive the Department’s Officer Vilho Ahola Most Inspirational Employee Award.

This annual award is a memorial to Petaluma Police Officer Vilho Ahola who was shot in the line of duty in 1969.  Though he was confined to a wheelchair as a paraplegic the remainder of his life, Vilho continued to work at the Department until 1989.  Vilho’s courage, positive attitude, caring for youth, and commitment to this department were an inspiration to all who knew him and continue today in his honor since his passing in February 1998.

Corporal Raccanello proved worthy of this award during two incidents in December 2019.  The first incident involved a domestic violence call with shots fired; during this event, Corporal Raccanello kept his teammates safe and resolved the dangerous situation with valor. A week later, Corporate Raccanello helped a young woman and her child who were stranded in Petaluma, personally paying for an Uber ride so that they could get home to Santa Rosa.

Corporate Raccanello – thank you for your dedication and your compassion. You truly embody the spirit of Officer Vilho Ahola, whose courage, caring for youth, and commitment were an inspiration to all who knew him. 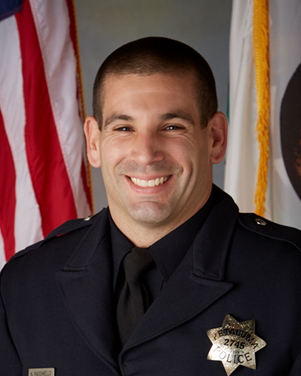