The City of Petaluma is excited to seek your feedback on the proposed 5th Street Bike Boulevard! The project aims to reinforce 5th Street's role as a safe, low-traffic street while making improvements that:

The City is committed to creating safer streets and doing so in a way that best suits the needs of our community. As a first-of-its-kind project in Petaluma, the Bike Boulevard will be installed using cost-effective and flexible materials that can be adjusted or removed, if necessary. This type of installation (referred to as "quick-build," "pilot," or "demonstration" projects) allows community members to experience and provide feedback on proposed changes before they're made permanent.

The Pedestrian and Bicycle Advisory Committee and several community members identified 5th Street as a potential low-stress bicycling alternative to Petaluma Boulevard South and 6th Street due to lower vehicle traffic volume and speed (and, in comparison to 6th Street, the absence of a hill).

What is a Bike Boulevard?

The City hosted a virtual community workshop on Wednesday, November 9 from 6-8 PM to:

The meeting was attended by 50 people. 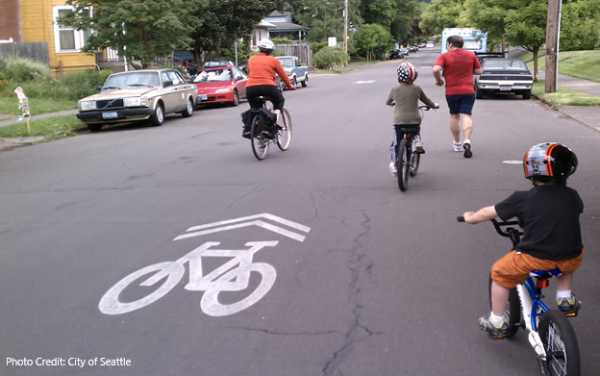 5th Street from A Street to Mountain View Avenue