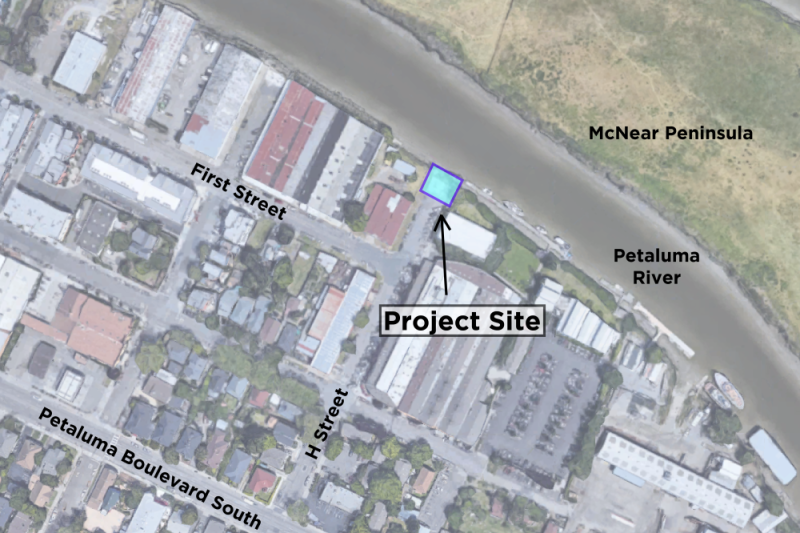 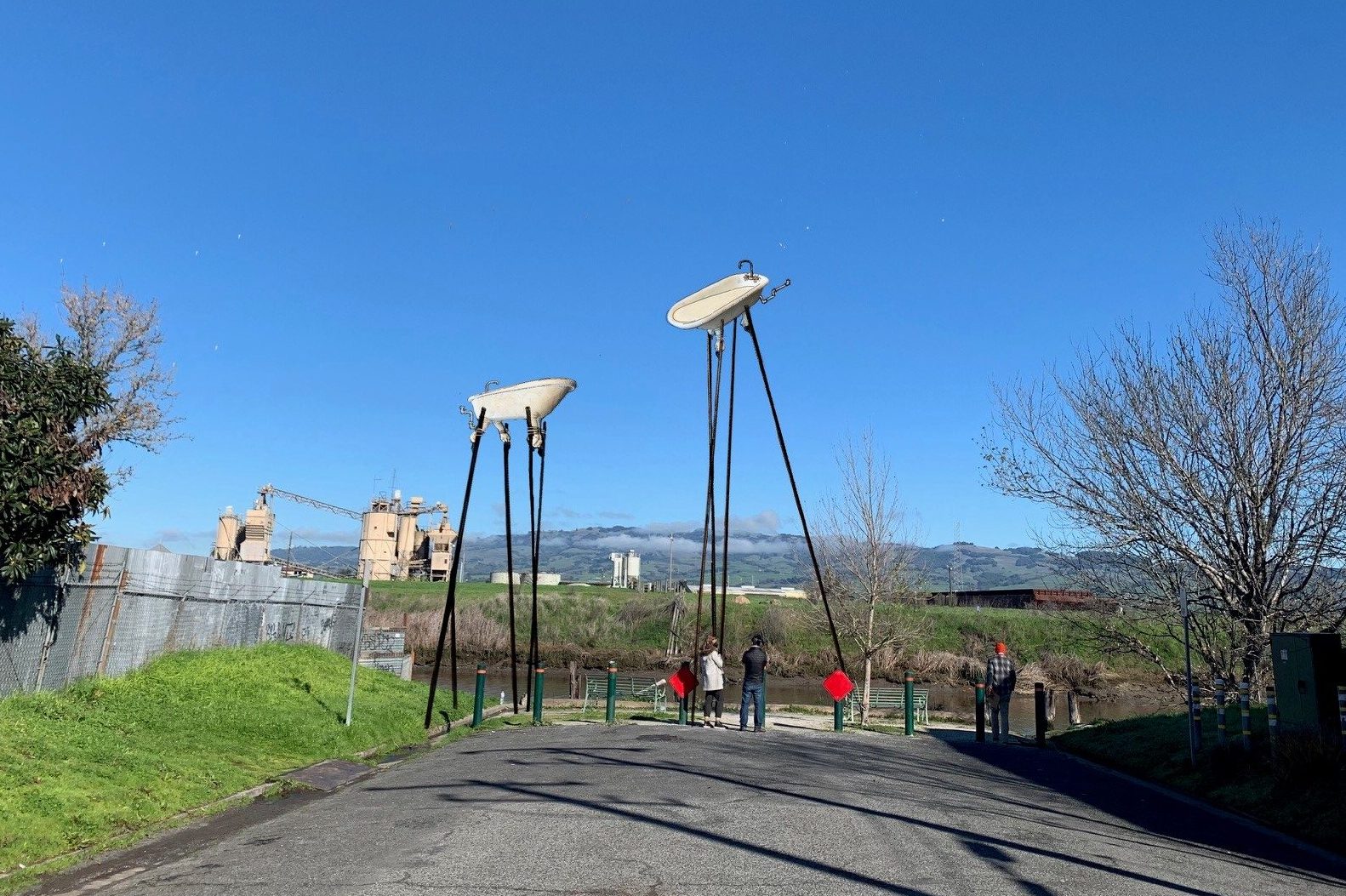 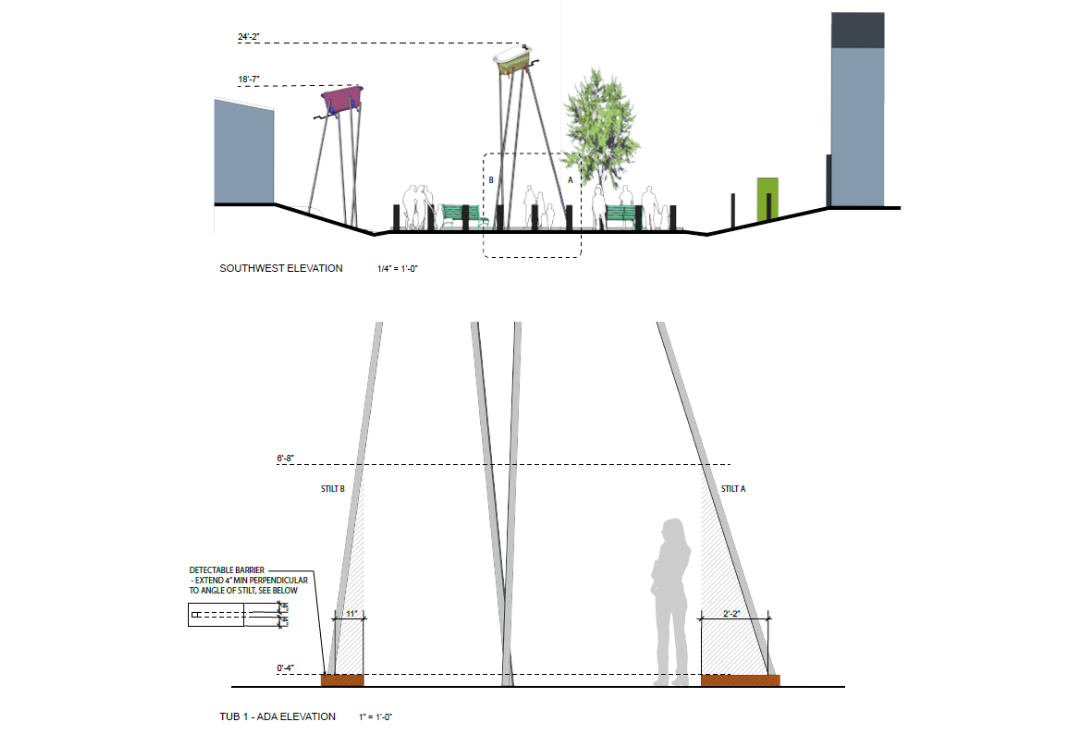 Fine Balance is a site-specific public artwork proposed for the H Street Pocket Park, located at the terminus of H Street at the Petaluma River near First Street. The artist, Brian Goggin (San Francisco, CA), has designed a new proposal for two sculptures at the park to be installed. The sculptures are casts of Victorian-era ball-and-claw bathtubs standing on stilts and mounted to a concrete foundation.

The Petaluma Public Art Committee (PPAC) unanimously recommended the newly proposed project for Council approved on March 24, 2022. The City Council unanimously approved the project as proposed on May 16, 2022, which approves the recommendation for the City to enter into contract with artist Brian Goggin to create Fine Balance at the newly selected H Street Pocket Park project site. Staff is currently working with Brian Goggin to create a contract for the project scope and process.

The Water Street Public Art project began in December 2014 when City staff, at the direction of the Petaluma Public Art Committee (PPAC), issued a Request for Qualifications (RFQ)/Request for Proposals (RFP), for the identified Water Street site. The original RFP was open for artist submissions for one year before it was terminated by the PPAC who elected not to select a proposal or artist/artist team at that time. PPAC directed staff to revise the RFQ/RFP to incorporate lessons learned from the previous solicitation as well as best industry practices such as outlining acute project goals, identifying stakeholders, and forming a selection panel.

PPAC assembled a selection panel containing community stakeholders to aid in incorporating revisions to the project’s call for artists and selection process. The call for artists was reopened in December 2016 with approximately 65 completed applications submitted during the second RFQ/RFP. The project's panel recommended two artists to the PPAC including David Best from Petaluma, CA and Brian Goggin from San Francisco, CA. Following interviews with the two selected artists, the PPAC ultimately selected Brian Goggin for the project. David Best was later commissioned by the PPAC to create an artwork for another site. More information about David Best's River Arch artwork commission on the Lynch Creek Trail can be found at the following link: https://cityofpetaluma.org/river-arch.

On August 7, 2017, Staff presented Brian Goggin as the selected artist for the Water Street Public Art project on behalf of the PPAC before City Council and recommended that they approve the Personal Service Agreement (PSA) to hire Goggin for the project. The City Council voted unanimously to approve the project's contract and process.

While Goggin developed his design proposal, community meetings were held to provide an opportunity for the public to interact with the artist and provide feedback on the community desires for Water Street, learn more about the goals and intent of the project, and provide comments on the role of public art in Petaluma. On February 22, 2018, Goggin presented his draft proposal of Fine Balance to the PPAC, which was unanimously approved by the Committee. In April and May of 2018, PPAC and Goggin hosted additional community meetings to showcase the concept to the public, and on January 12, 2019, hosted an on-site "Story Poll" event that presented a to-scale mock-up of the five bathtub structures on Water Street indicating their projected footprint on the area and their impact on the surrounding landscape and hardscape features. Over 200 attendees were onsite at this Story Poll event.

At the February 28, 2019 PPAC meeting, Goggin presented the final concept proposal of Fine Balance to the Committee. In response to the presentation and proposal, members of the public brought forward a request for the artist, PPAC, and City Staff to find an alternative location for the proposed artwork. The PPAC acknowledged the public’s feedback, incorporating the public discussion into the project’s proceedings. Primary response by PPAC members to the public noted the project’s design being site-specific and the artist’s cooperation with the City to modify the proposal plans for safety and consideration of the community's desires and concerns. The PPAC carried a 4-2 motion at this meeting, approving the final site-specific concept of Fine Balance for the Water Street Public Art project.

The approved Water Street Public Art project final site-specific concept was appealed by members of the public on March 12, 13, and 14 of 2019 via three appeal applications. The primary points cited in the appeals noted that the project is inconsistent with preserving Petaluma's Historic Downtown buildings and streetscapes and must be compatible with the historic character of the downtown. One appeal called for additional review and approval from other committees, including the Historic and Cultural Preservation Committee, Planning Commission, and City Council.

On April 9, 2019, City Staff presented the approved concept and design of Fine Balance to the Historic and Cultural Preservation Committee (HCPC) for feedback. Staff requested the HCPC provide input about how the proposed artwork would interact with the existing historic elements of the Petaluma Historic Commercial District, which the project site is within. The Committee provided a spectrum of compliment and concern about the proposed artwork’s impact to the historic resources that define the historic district's integrity. This discussion and the committee members' comments were summarized by Staff to be presented before City Council.

Fine Balance was presented before Petaluma City Council on September 16, 2019, where appellants presented their comments to the Council during the meeting. The Council carried out a 6-1 vote denying the three appeals filed and upholding the PPAC's approval of final design for Fine Balance in its proposed location. The Council determined that a California Environmental Quality Act (CEQA) review would be required to move forward with the proposed project in the original Water Street location.

The City contacted environmental firms and consultants that would be interested in making bids for a focused Environmental Impact Report (EIR) RFP to satisfy the CEQA review process. At the PPAC meeting on October 22, 2020, Staff shared that one proposal was received by the City from a Bay Area environmental analysis services consultant with an approximate budget of $90,000.

Fine Balance's location was considered at the PPAC on April 22, 2021, where subcommittee members, the PPAC, and Staff reviewed alternate sites for the proposed artwork at other locations provided by members of the public and Committee members. With a 4-3 vote, the PPAC approved moving forward with the EIR bid for the Water Street Public Art project with Goggin's approved concept in its original proposed location. This action was approved using the Public Art Fund for costs associated with the EIR process, which required review and approval by City Council.

On Monday, September 13th, 2021, the City Council determined not to approve using Public Art Funds for the purposes of executing an EIR for the project. The Council instructed the PPAC to explore alternative project sites that would satisfy public support and opposition as well as avoid impacting historic resources, as originally cited as a primary conflict for the artwork at its proposed site. The Fine Balance Subcommittee worked with the artist's team, the City's Planning Division, Department of Public Works, and other stakeholders to find appropriate project sites to propose to the PPAC.

At the December 5th, 2021 PPAC meeting, staff presented the findings from the project subcommittee and artist's site identification efforts, proposing new project sites of Water Street North and pocket parks located at the terminus of G Street and the terminus of H Street along the Petaluma River. The Committee approving the artist moving forward to develop a proposal for one or both of these sites for the project.

In January of 2022, the artist and team attend the City's Design Review Committee (DRC) meeting for City officials to consider and provide feedback on initial concepts and designs to inform the artist of potential hazards, site concerns, and other features such as permits to be considered at the sites. From this meeting, the artist began to focus on the H Street pocket park for the proposal and deliver a proposal package to the Public Art Committee to review as instructed by the City Council. This proposal package consisted of a site plan, artwork renderings, a tentative timeline, a project narrative, and preliminary budget for the PPAC to make an informed decision regarding recommending the proposed artwork project.

At the March 24 PPAC meeting, the proposal was reviewed and considered by the Public Art Committee. The artist submitted multiple iterations of the Fine Balance proposal, which included variable budgets and elements that supported lower the overall project budget and maintain continuity with the original artwork proposal for Water Street location from 2017. With clear instruction from the City Council and as voiced by the community, the Public Art Committee determined that the project must stay within the remaining original allocated budget that was not utilized in the original approved project from 2017. At this meeting, the PPAC recommended approval of the two-sculpture proposal at the newly identified H Street project site that includes lighting and signage, as well as all-inclusive fabrication, design, and installation in its budget that was proposed within the remaining allocated budget.

The artist Brian Goggin is currently not in contract with the City.

Artist Brian Goggin has created a webpage on his artist page for Fine Balance. The following links will take you to his external webpages about the artwork concept, proposal, and narrative. Please go to the following external links to learn more about the proposed artwork as told by the artist: