This is a newly launched website for the City of Petaluma.  Please excuse us as we make it perfect. And, let us know what you think.

n the early 1850’s, Petaluma, California was developing into a thriving community. The Gold Rush and Petaluma's location, at the end of a navigable waterway, were key to a thriving economy. As with all new communities at this time, the buildings were constructed of wood with little to no space between structures. Fires were prevalent and there was no organized fire protection available.

On June 5, 1857, a fire started at Washington and Kentucky Streets. This fire threatened the entire business portion of the town. Citizens were able to extinguish this fire by forming a bucket line from the river to the fire site, a distance of over a block.

The organization of a fire company took place that night. Officers were elected, a code of bylaws was established, and a means of fund raising was decided upon.

On June 13, 1857, a poetry reading was held at the town's Music Hall. A Mrs. Conner read “Hiawatha."  A little less than $200 was made and this money was used as a down payment on a fire pumper.

On July 2, 1857, a committee headed by a Mr. Weston went to San Francisco and returned with a hand pumper that was used at the Knickerbocker Engine Company Number 5 station of the San Francisco Fire Department. The engine was purchased for $1,500.00, with the balance due in ninety days.

November 20, 1857 Hook and Ladder Company Number 1 was formed with fourteen charter members. This company was housed in a station on English Street (now Western) near Keller Street. One of the members, William Ordway, was a blacksmith and carriage maker. He built the first ladder truck. It served Petaluma until 1886, when an up-to-date Hayes ladder truck was purchased. The Hook and Ladder Company's motto was, “WE DESTROY TO SAVE!"

1858 The City of Petaluma was incorporated. One of the first acts of the City leaders was to build two 20,000-gallon water cisterns: one at Kentucky and English Streets, the other at Kentucky and Washington Streets.

1859 The Petaluma Fire Department was organized. Petaluma had a population of 1,338.

June 1, 1864, The Sonoma Engine Company Number 2 fought a large fire at Cohn’s store on Main Street above Washington Street. The store was said to contain forty kegs of gun powder. A Hunneman hand pumper from Boston arrived in February of 1865.

1875 A high-pressure hydrant system was installed in Petaluma. This allowed fire companies to hook their hoses directly to the hydrants, eliminating the need for a pumper. Engine companies soon became hose companies and some companies were disbanded.

1909 The City of Petaluma formed a paid Fire Department.

March 22, 1914 3:40 A.M. The steamer Petaluma was destroyed by fire at the Gold dock at the foot of Copeland Street. The lost cargo included fifty cases of shoes, one case of manufactured silk, two carloads of tanned leather, 200 cases of eggs, a large two-horse express wagon, ninety cans of cream, 300 sacks of sawdust, and two new Corliss gas engines. The cause of the fire was undetermined.

September 1915 The City purchased a Hayes hook and ladder truck for $300.00 and fitted it to be pulled behind one of the auto engines.

August 17, 1917 The Gem Theater (the Wickersham Building) on the east side of Main Street (Petaluma Blvd) suffered a great deal of damage in a fire. The Neilson Furniture store on the ground floor and the Gem Theater upstairs were both heavily damaged by the fire, smoke and water.

November 8, 1920 Just after midnight, Purser Lindgren woke Captain Bell. There was a smell of smoke and soon flames erupted on board the steamer Gold. The oil tanks on board exploded, a southeast wind pinned the Gold to the dock, and the fire spread to a fifteen-car freight train and eight cars were destroyed.  After twelve hours, the Gold had burned to the water line, the cargo was a total loss, a mess boy had lost his life, the dock, the eight train cars, and the freight sheds were destroyed. The Petaluma and Santa Rosa Railway Company, which owned the Gold, covered the losses. Donations to the Fire Department helped pay the volunteers an extra $5.00 each for their valiant efforts.

January 19, 1924 Golden Eagle Mills had a fire in one of its grain elevators on Washington Street. The Fire Department kept the damage to a minimum, even though it took two days to extinguish the fire completely. The loss was approximately $50,000.00. In 1884, the mill's predecessor burned to the ground.

November 27, 1925 The McNear warehouse at First Street between 'F' and 'G' Streets was destroyed by fire. Twelve tons of hay was in the 50' by 220' building. It took several days with the crew standing by to make sure the blaze was quenched.

January 9, 1927 The 1858 warehouse of the Golden Eagle Mill went up in flames. Hay, grain, corn, and copra fueled the blaze.

May 1927 The Tannery, an older wooden structure, could not be saved. The four-story building made a good bonfire itself, but the hides, tallow, paraffin and fish oils stored within made an intense blaze that doomed the structure.

May 31, 1928 Three thousand chickens and 300 cases of eggs were destroyed in a fire at the Stewart and Murry Packing Plant at the rear of 262 Main Street.

In late 1927 the Fire Department purchased its first asbestos suits and in 1928 it obtained gas masks.

June 29, 1933 The Sales Hatchery at Third and 'I' Streets was ablaze when the Fire Department arrived on the scene. The PG & E transformers caught fire and  William Cuslidge climbed up the pole and used an extinguisher to put out the flames.

June 1942 In the Sweed building, the Schindler Bakery and Rex Hardware Company were consumed by fire. Ernest Hobbie, head of Rex Hardware, had started a fire in his office stove as he was at work on a Sunday morning. When he returned a few minutes later, the room was ablaze.

1947 The voters reorganized City government through a new City Charter. The Board of Fire Commissioners ceased and the Petaluma Fire Department was placed in the hands of the City Council.

1954 Under Mrs. Grace Vallier, a Women's Auxiliary Fire Service was formed to help free the firemen for fighting fires. Women were trained to handle radios, operate the siren system and do some administrative work. They were also trained in use of extinguishers, first aid and home safety.

August 5, 1957 A fire began in the balcony of the then California Theater (now the Phoenix), originally built in 1896 as the Hill Opera House, then as a movie house in 1925. The building burned between the roof and the false ceiling.

April 13, 1958 An alarm came in at 9:47, but because the Bundesen Hatchery was one block outside the City limits, the Petaluma Fire Department had to stand by their equipment until mutual aid was called at 10:35. By that time it was too late to make a difference. A 1951 ruling by the City Council required that City firemen remain within the City limits. This resolution has been updated over the years and there is a current Mutual Aid Program in place.

August 21-22, 1960 Sacks of dehydrated alfalfa caught fire at the Nulaid Farmers warehouse. The fire took all night to put out. While firemen were standing watch the next day, Chief Eaglin noticed flames coming from the Ash Bag Company across the street. Five hundred thousand empty bags were reduced to ashes by the time the fire was controlled. A watch was kept on both sites for several days.

July 22, 1961 5:00 P.M. The alarm sounded and the three men on duty soon became ten. The Old Box Factory at First and 'G' Streets was coming to a spectacular end. The fire was believed to be arson.

July 1965 Firefighter's Local 1415 was formed and the on-call system was established. Firefighters worked a 72-hour week and then were required to be on-call for 36 hours as volunteers.

July 4, 1967 The Golden Eagle Milling Company was reported on fire at 3:09 A.M. Four engines and the aerial responded. Almost 40,000 gallons of water was needed to suppress the fire, but the buildings were a total loss.

April 1968 The Fire Department started doing Fire Safety Inspections at all businesses in the City limits.

May 6, 1968 Fire destroyed the Continental Hotel.

February 1975 Apartments at 623 'F' Street were destroyed when fumes from machinery exploded.

December 25, 1976 1:28 A.M. A tragic Christmas for the Meader family. Wrappings from gifts had been left in a plastic bag on the floor furnace grate. The home was fully involved when the engine arrived on the scene. The firefighters found two small children dead in an upstairs bedroom; two other children were injured and taken to the hospital.

January 1, 1977 2:46 A.M. A general alarm sounded for a fire reported at Beasley's Restaurant, 170 Petaluma Boulevard North (Wickersham Building). There was one fatality and the building suffered major damage.

January 2, 1978 The alarm came in at 1:18 A.M. The sky was ablaze. Officer Bartholomew reported the business complex on Washington Street consisting of Acme Sheet Metal, the old Friedman Brothers floor covering store and hardware store, Pacific International Auto Parts and the Acme warehouse on fire. Two engines were immediately dispatched; the aerial and all personnel were summoned. This fire aggressively spread and the whole complex of older buildings was a total loss.

October 14, 1982 A stubborn fire at the old Atkinson Dairy on Ely Boulevard began about 4:30 P.M. The fire was in an old pond used to hold twenty years of effluent from the dairy barn. The result was massive amounts of smelly smoke.

October 24, 1982 R.O. Shelling at Magnolia and Petaluma Boulevard North: A welder set off a grain dust explosion. One injured employee was taken to the hospital with burns. Spot fires were put out and a 24-hour watch was posted.

December 9, 1984 The Great Petaluma Mill Annex Fire. An electrical fire burned in the ceiling space and got a two-hour start before it was detected. There was about $400,000.00 in damage to the building and the contents.

May 7, 1987 The Apple Box fire at 124 Kentucky Street was caused by furniture cleaning rags left in the basement, which led to spontaneous combustion. There was $300,000.00 in damages. The building was originally the American Stables. The support rafters in the floor were 16" by 16" by 30' redwood beams that were merely charred by the blaze.

October 1989 An engine from Petaluma was part of a strike team that went to the Santa Cruz area to help with the Loma Prieta Earthquake.

October 1991An engine from Petaluma was sent to the Oakland Hills fire.

1993 saw the department answer fire calls to nine structures where more than one hour was spent suppressing the blaze and more than one fire engine responding.

1996 There were eight responses to various structure fires from January to June. Then on July 4 at 5:52 P.M., a tanker carrying gasoline flipped over on the Washington Street exit and burned to the pavement. Vegetation and fences within a 150-foot radius were scorched. 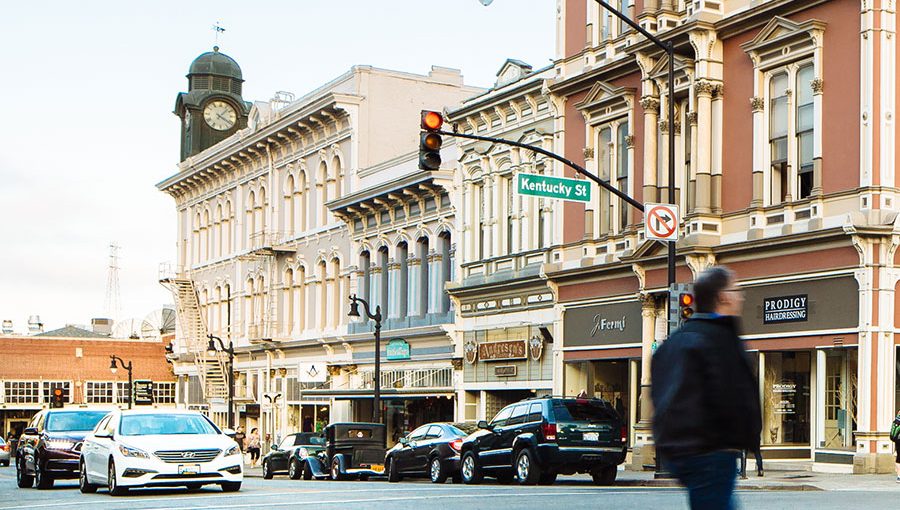