Petaluma River Once Considered a Creek

The Petaluma River flows from its headwaters on Sonoma Mountain, past the city of Petaluma and out to San Pablo Bay. With a watershed smaller than that of neighboring Sonoma Creek, it was called Petaluma Creek up until about 1960, though most of it is actually a tidal slough.

According to Merriam-Webster’s dictionary, a river is “a natural stream of water, usually of considerable volume.” But how much is “considerable” and how often is “usually”?

Sonoma Creek’s flow typically exceeds that of the Petaluma River, sometimes by a wide margin. During the 2006 New Year’s flood, the Petaluma River was running at 9,600 cubic feet a second while Sonoma Creek hit 20,000 cubic feet a second (the Missouri River, a hundred miles below its headwaters, only occasionally tops that). In fact, some 19th-century mapmakers labeled the stream the “Sonoma River.” During a winter storm, it easily earns the title, though in the summer it sometimes dries up in places.

In the United States, a creek is “normally smaller than and often tributary to a river.” Originally a British term for “a narrow sheltered waterway, especially an inlet in a shoreline or a channel in a marsh,” its meaning changed over time. As settlement progressed inland above saltwater and tides, the word followed and was applied to freshwater channels, too.

Around San Francisco Bay, sloughs are tidal channels where salt and freshwater mix (elsewhere they can be freshwater side channels). At low tide that brackish water flows “downstream” into the Bay, but when the tide comes in, the flow reverses and goes “upstream.” Our sloughs are similar to British “creeks.”

So how did Petaluma Creek become the Petaluma River? As Newt Dal Poggetto, a lifelong county resident described it: “It was Petaluma Creek until Clem Miller got it named a river.” After being elected to the House of Representatives in 1959, Miller “found out that if you could change the name of a creek to a river, you qualified for the Army Corps of Engineers budget. Spending money! So he got Congress to change the name, which qualified it to get federal funding for dredging and building levees.”

by, ARTHUR DAWSON
FOR THE PRESS DEMOCRAT 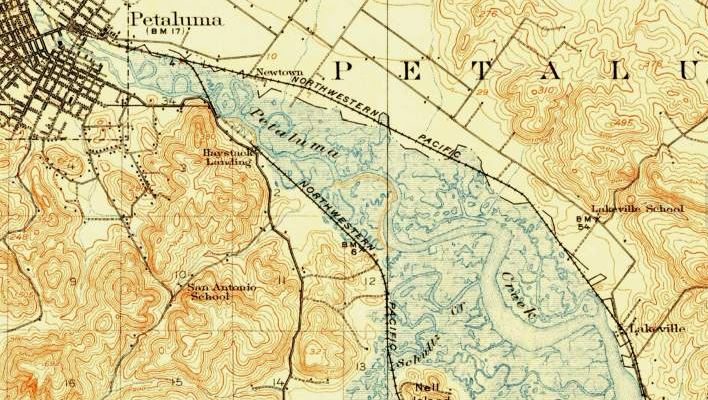