Big news! Petaluma has completed the transition to district elections. Thank you to everyone who provided input throughout this process. At their April 4, 2022 meeting, City Council adopted the District Elections ordinance which includes the final map and specifies which three districts will be the first to elect district representatives in 2022, and which three districts will elect district representatives in 2024.

As you will see below, Petaluma has been mapped into six districts of nearly equal population. Voters in each district will vote for one eligible candidate to represent them on the City Council. As outlined in the ordinance, Districts 1, 2, 3 will be the first three districts to elect district representatives in 2022. Districts 4, 5, 6, will then elect district representatives in 2024. The Mayoral seat will continue as an at-large seat, and be elected in 2022.

Below you can find the final map, a link to search what district you are in, as well other documents related to this transition.

To find your address on the final map and learn which district you are in, CLICK HERE. You will input your address into the search bar at the top right and it will pinpoint it on the map. Use the + and - tool in the top left to zoom in for a closer look and use your curser to move the map around as needed.

Thank you to everyone who provided input throughout this process. At their March 21, 2022 meeting, City Council approved a final map:

WHAT DOES THIS MEAN FOR THE CURRENT CITY COUNCIL?

The City’s transition to district elections does not affect the terms of City Council members.

The City Council selected sequencing at the public hearing on March 21, 2022.  The California Voting Rights Act (CVRA) provides some guidance about which new voting districts should elect their representatives first. The purposes of the CVRA include eliminating minority vote dilution to give members of a protected class an equal opportunity to elect the candidates of their choice. 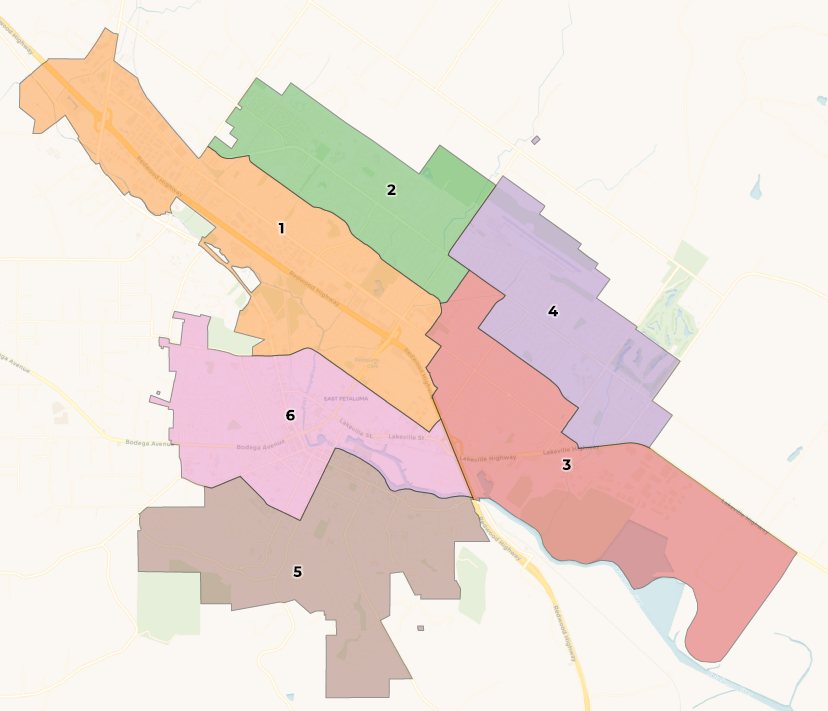 View all the draft maps submitted by the public (each with an atlas with a data breakdown) and documents related to the City of Petaluma's transition to district elections. Click here.

The City has put together a list of Frequently Asked Questions - click here. Additional questions can be sent to the City via email or by signing up to receive email updates or share questions/comments.

Along with the four prior public hearings, on March 7, 2022 City Council held Public Hearing #5 for both the Council and members of the public to review draft district maps and information provided by staff about the map features. They then walked through the remaining steps in the district transition process, including the potential sequencing of the district elections. At that hearing, the City Council reviewed a selection of maps and chose one for final approval:

Updates based on direction provided by City Council on Feb. 14

In addition to Draft Plan A, Version 3, six of the publicly submitted maps were elevated as Draft Plans.

Updates based on direction provided by City Council on Jan. 31 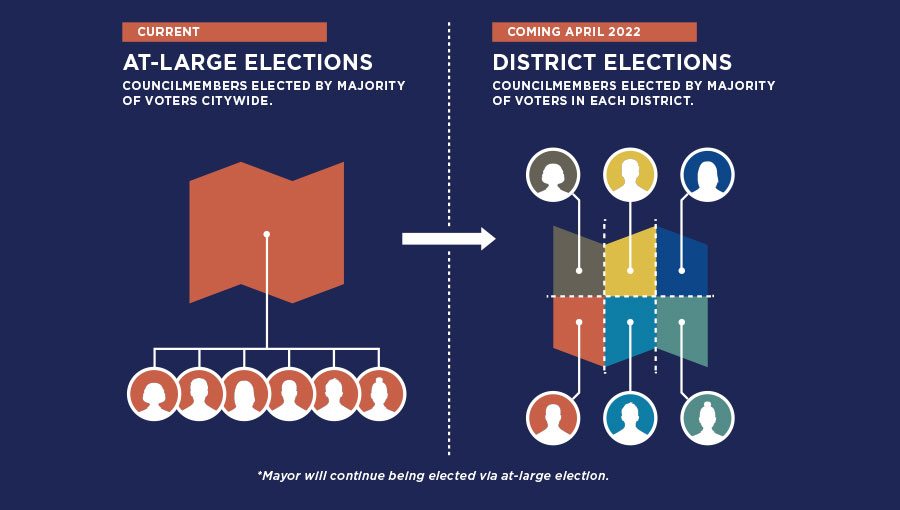